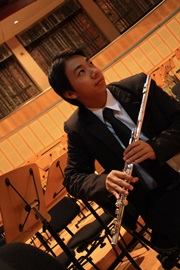 Was initially introduced to music world by joining Wat Suthi Wararam School’s military band under the coaching of Mr.Surapol Thanyawibool and Mr. Nipat Kanjanahud. Continually, he made his bachelor degree of music at Kasetsart University majoring in flute performance. Teerawat studied with Mr.Worapon Kanweerayothin. During this period, he had an opportunity to give a concert at Esplanade Hall, Singapore as one of KU Wind Symphony member. After graduation, he became a musician in Siam Philharmonic Orchestra as well as performed with other Thai prominent orchestras such as Bangkok Symphony Orchestra, Nontri Wind Orchestra and Chaophaya Orchestra. In 2005, Teerawat participated in “International Music Festival Phnom-Penh, Cambodia” playing a role in chamber music. In 2009, he was chosen to the Asian Youth Orchestra member which let to a major concert tour throughout Asian countries. In 2010, he moved forward with his study in Master music program at Chulalongkorn University and later graduated in 2012. At present, Teerawat is a music instructor at Bansomdejchaopraya Rajabhat University and at Bangkok Music Curriculum School. Furthermore, he also plays for Siam Opera, Nontri Orchestra and being a lecturer at many music institutions in Bangkok.