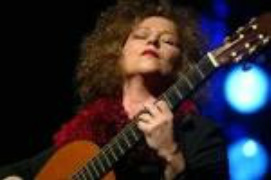 Valérie Duchâteau grew up in Céret, a small town located in the south of France and impregnated with a lot of culture as Picasso or Braque also stayed there before becoming famous. The geographical situation of Céret, at a few miles from Spain, will really help her concerning the choice of her musical instrument and so she will choose to play the guitar very naturally. She was only nine years old when her first teacher, Angel Iglesias, took her to Barcelona, where she played the guitar with Paganini’s or Miguel Llobet’s.

She was hardly eleven when she was introduced to Alexandre Lagoya who managed her immediately and said : “Valérie Duchâteau will find her place in the guitar history”.

So it was the beginning of twelve years of collaboration with Alexandre Lagoya whom she met at the “Conservatoire National Supérieur de Paris” again, where she got a first prize before appealing to the United States. There she got the first prize of the “Fondation d’Addario”. After a long tour through this country with David Leisner, she flew to Japan where she played with Minoru Inagaki.

Coming back from one of her journeys, she met Marcel Dadi with whom she often shared the stage. If she only was a classical guitarist until this period, she discovered then country music, picking. One more time, she played with the greatest artists like Chet Atkins, Larry Corryel or alsoNato Lima (the composer of the famous Maria Helena) and with Tom Bresh, the son of Merle Travis.

In Nashville, where she felt a little at home, Tom Bresh managed her first  CD“America”.

At the same time, she published at Paul Beuscher’s a teaching method for the classical guitar, that illustrated all the musical experiences she had thanks to her different meetings.

Then she found her classical musical universe for two years again, at the “Opéra de Paris”, where the conductor James Conlo wanted her as a soloist guitarist at his side.

Nevertheless her curiosity brought her to take up another challenge, so she arranged and played twelve songs of Barbara, the famous french singer,what gave birth to a performance which was famous all over France and Europe.

At the same time, she joined with the “Guitarist Magazine” to create a new collection “LES CHEFS D’OEUVRE DE LA GUITARE CLASSIQUE”, from which she recorded the two first volumes that had to be sold at more than 15,000 examples.

2004 she paid homage to her region of adoption, Catalonia, by arranging twelve Catalan songs.

At the same time, she went on her classical concerts as well as her original experiences by giving a new duo of classical-flamenco guitar with the famous flamenco player Pedro Soler and touched Gypsy Music with an incredible CD

consecrated at the Django Reinhardt Music. The record " Perfume of Django", adaptation of the best success of the famous gypsy player at the classical guitar, received a lot of honour from the European Press.

As she was always very interested, she continued her experience with press by starting a magazine devoted to the acoustic guitar and the classical guitar.

Today, Valérie Duchâteau is an artist and an accomplished lady who was able to find a totally new way in the classical guitar genre, as well in her educational work as in her performance, her arrangements for guitar or her compositions.

So are the fruits and treasures of her career. Music playing is the speech of her mind.